By this point, you don’t need me to tell you that naming a battle royal after Lillian ‘The Fabulous Moolah’ Ellison was a bad idea. The chances are you already knew that she was an abuser – or at the very least, you knew she did more to push women’s wrestling backwards than forwards in the US, and then you saw the rich array of articles outlining how she was so much worse than that.

It’s not exactly surprising that the Fed decided to go this way. WWE historiography doesn’t give them too many options. As far as WWE’s presentation of women’s wrestling goes, Moolah and Mae Young were the only women in the wrestling industry until about 1985, when Wendi Richter and Cyndi Lauper cropped up as a brief interlude before Sensational Sherri, the Alundra Blayze years, and the Attitude Era. It is lost on no-one that Mae and Moolah were often guest referees in gravy bowl matches, presumably to add some gravitas to proceedings.

Mae Young has now had a tournament named for her, and since most of the other significant alumnae from WWE are either still alive or died in complicated, often drug-related circumstances, it’s obvious WWE thought there was no-one else left who was deserving of a battle royal in their honour.

Yet women’s wrestling has had a wealth of trailblazers – and it would have had more, had Moolah not actively held back anyone whom she deemed as a threat. If WWE was willing to broaden its view of women’s wrestling history, they would have plenty of other options. If the company had any sense whatsoever, they could even find some living legends who could hand out a trophy in person. Now they seem to be dropping Moolah’s name from the event, let’s consider a few alternatives.

The extent to which Burke has been excised from WWE’s historical narrative would have been shocking to those who lived through the peak of her career. She was a long-time champion who wrestled in the main event of hundreds of big-drawing shows. According to Pat Laprade and Dan Murphy in Sisterhood of the Squared Circle, by the early 1940s, as women increasingly took on roles in sports and entertainment to fill the void left by men going to war, 40% of the national audience for wrestling was female. Interest in wrestling training was booming. A huge proportion of those women will have seen, and were often trained by, Mildred Burke. We know that one of them was a young Lillian Ellison.

Burke’s career was ruined after a hideous divorce and business dispute with her husband, promoter and noted scumbag Billy Wolfe. She and the talent she promoted were blacklisted in territory after territory, as he effectively ran her out of the US wrestling industry. The upshot of this was that Burke ended up bringing Japan its first ever all-female wrestling shows, a move which seems to have turned out pretty well. Nobody deserves recognition at WrestleMania more than her.

Wolfe, incidentally, was also Moolah’s first promoter – she may have left him to go it alone after one dispute too many, but she clearly learned a lot from him.

If Burke is too much of a stretch for the McMahons, then June Byers would be a logical replacement. After years of brutal legal and regulatory disputes with the newly-formed NWA, Wolfe eventually managed to screw Mildred out of her title during a 1954 shoot match against Byers – his lover and eventually his daughter-in-law. Wolfe billed her as his champion, and the muscle she had put on while training to wrestle Mildred Burke for real earned her a reputation as one of the toughest women on the US wrestling circuit. Needless to say, she was not invited to take part in the 1956 tournament where Moolah won the shiny new championship she had developed with Vincent J. McMahon. 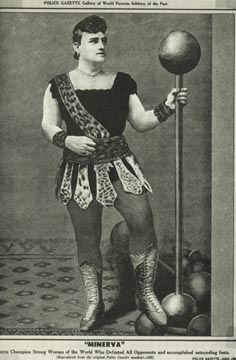 Here’s a deep cut for you. Born in 1869, Josie Wahlford was a strongwoman and skilled wrestler under her stage name of Minerva. She built her career through the carnival circuit, where she was known for her incredible feats of strength and for challenging men and women alike to wrestle her. Some time in the early 1890s, she became the first National Police Gazette champion, which makes her one of the earliest recorded women’s wrestling champions.

She defended her title across the US in unregulated bouts again women and men, and eventually took her show on the road to wrestle and perform feats of strength in Mexico and Europe. Eventually, she came off worst in a high-profile title feud with Laura Bennett, who had made her reputation as part of a family of sisters putting on boxing exhibitions. Strongwoman vs boxer is a fight I’d take over Mayweather vs McGregor anytime. If you want a pioneer of women’s wrestling, Wahlford’s as good a choice as you’ll find.

Sherri did everything. She was a great manager and talker, a very skilled wrestler, and seems to have been loved and respected by her peers. Hand-picked to Moolah’s successor as champion, during the late 1980s her feud with Rockin’ Robin for the women’s championship was really the only women’s storyline in WWF. She worked valiantly in feuds with Sapphire and Luna Vachon to get women’s wrestling going again for the Fed in the early 1990s, and nobody in the industry seems to have a bad word to say about her. So why wasn’t Sherri the Fed’s first pick?

She was fired in 1993 due to her issues with addiction – cruelly, she missed out on the brief renaissance of the women’s division when Alundra Blayze was on top. But plenty of recovering addicts have found their way back into the company’s good graces, and Sherri entered the WWE Hall of Fame in 2006. Does the fact that she died of a drug overdose a year later detract from her legacy, either in the ring or in the industry?

Wendi Richter is alive and, based at least on her Hall of Fame speech, not particularly bitter about her departure from WWE, so she would probably be a good choice to hand out a trophy to the winner. It would also help that not only was she a talented wrestler (as her matches in Japan can attest), but she was a legitimate mainstream star in the mid-1980s: her relationship with Cyndi Lauper was one of the cornerstones of the so-called ‘Rock and Wrestling Connection’, and the worked feud between Lauper and Captain Lou Albano led to Richter wrestling her trainer and mentor Moolah on primetime MTV.

But the real reason I’d love to see Richter honoured goes back to her leaving the WWF. Supposedly as a result of a pay dispute, Vincent J. McMahon decided to screw her out of her championship so she couldn’t leave the company with the title. Nobody knows for sure whether Moolah put him up to it, but it goes without saying that she was the one who walked out with Richter’s title after the ‘original screwjob’. Richter walked out of the arena without getting changed and never went back.

After all this time, there would be something satisfying about seeing one of Moolah’s many victims get the spotlight at her expense.